The Arena da Amazônia in Manaus, Brazil, was a fatal arena. All teams featuring there in the 2014 FIFA World Cup fell under the unbearably heat. Italy, England, Cameroon, Croatia, USA, Portugal, Honduras, Switzerland. All lost their game following that at Manaus (with the exception of Portugal who won over a Ghana team on strike and Honduras who got eliminated after their Manaus game…).

Wasn’t it merely a coincidence?

It’s hard to say. But I doubt it. Italy, England and Croatia were all favorite for their next games, but they all seemed short of energy in the last minutes.

So is it that hot in Manaus?

Weirdly enough… no. As teams played late in the evening, the temperature never exceed 32°C (89.6°F). As a result, accordingly to the FIFA cooling break rule, players were not given any additional break to recuperate from the exhausting heat. Nevertheless, this didn’t prevent players from making a big deal out of Manaus’ unbearable climate.

Italian footballer and goalscorer Claudio Marchisio even asserted: “At times it seemed we were having hallucinations from how hot it was”…

So, why were players complaining about heat if it weren’t that hot in the first place?

Good question! In short, it’s because what you feel is the dynamics of heat, also known as thermodynamics. But not heat itself.

You Do Not Feel Heat Nor Cold

Let me say it once again, slightly more rigorously. You cannot feel temperature.

What the hell are you talking about?

If you’ve been to the beach last summer, you should have an idea of what I’m talking about.

Did you swim? Have you experienced that refreshing (if not scary) jump from the sand to the water? Has it ever occurred to you just how cold water was?

But that’s not surprising, is it? The water is usually colder than the air…

In summer it is indeed. But weirdly enough, that water is still usually above 20°C (70°F).

In the spring or the fall, you’re probably hanging around in tee-shirts at that temperature. Yet, you may not feel cold. In fact, if you’re running or doing sports at 10°C, you’ll probably be fine even if you’re topless.

Well, let’s think about it. Have you ever been into a jacuzzi and in a sauna? While they might both feel as hot as one another, the jacuzzi never exceeds 40°C (104°F) for health reasons, while saunas go up to 80°C (175°F)! Somehow, at high temperature, it seems to be the exact opposite. Water seems hotter than air! Similarly, here’s an advice: never use metallic objects to take out a plate from the hot oven. They’ll feel much hotter than, say, wood.

As I stressed it earlier, what you feel is not heat. But instead of explaining why myself, check this awesome video by Derek Müller on Veritasium. I think it’s one of the very best of Derek’s.

So there it is. 20°C (70°F) metal feels colder than 20°C (70°F) paper, because it absorbs heat away from you (or whatever is in contact with it) at a faster rate than paper does. This rate of heat absorption (or loss) is precisely what you feel, as opposed to the actual temperature of objects you interact with.

It kind of does! Water, like metal, conducts heat quicker than air, or paper, does. Now, another important aspect to keep in mind is that your body temperature is at 37°C (98.6°F). So, if we enter in contact with anything of smaller temperature, heat will be driven away from us. Conversely though, when we touch something of greater temperature, like the water of jacuzzis or the air of saunas, then heat will run into our body. Now, because water conducts heat quicker, jacuzzi water drives heat into your body at the same rate as the hotter sauna air does. This is why 40°C (104°F) jacuzzis feel as hot as 80°C (175°F) saunas.

Exactly! Now, a clever way to think about temperature is to notice how misleading the adjectives “hot” and “cold” are. In the following video on Minute Physics, Henry Reich proposes to redefine “hot” as “the property of objects to give away heat”, while “temperature” is “a measure of the jiggliness of particles of an object”.

Following Henry’s definition, while there’s a correlation between “heat” and “high temperature”, they are far from being the same…

Can you recapitulate what the difference is?

How does that relate to temperature?

Hummm… I should also say… Should I say it?

What? What aren’t you saying?

Fine, I’ll say it. I’ve kind of just lied to you. There are particular settings of extreme physics where very low temperature objects are actually… hot!

I shouldn’t go into details right here, but basically, some low temperature objects tend to give away energy to any object in their surrounding! This is explained by Professor Moriarty on Sixty Symbols:

Roughly, the cause of this counter-intuitive phenomenon is our misconception of temperature. It’s not really the jiggliness of temperature. At least, not in weird extreme settings. Formally, in thermodynamics, temperature is actually defined as the inverse of the variation of entropy when we add energy. In classical gases and liquids, this entropy is tightly bound to energy, because of the so-called Boltzmann distribution that Prof. Moriarty mentioned. However, some extreme states of the matter do not follow this distribution, and the usual link between entropy and energy may not hold. In such a case, adding energy to a system may in fact decrease its entropy, in which case temperature is negative! But the system may not be willing to absorb energy, and would thus be hot!

Now, as you’ve probably guessed, wind and humidity don’t actually affect the temperature of the air surrounding us.

So, do they feel colder because they increased the conductivity of air?

Exactly! Let’s start with humidity as it is simpler. Basically, to have an idea of the effect of humidity on conductivity, a clever trick that physicists like to abuse of is to consider the extreme case. And the case of extreme humidity is quite simple: It happens when you substitute air by water entirely! This gets us back to the sea vs jacuzzi situation. As we have seen, 20°C (70°F) sea water is much colder than 20°C (70°F) atmospheric air, while 40°C (104°F) jacuzzi water is much hotter than 40°C (104°F) air. This is because water has a greater thermal conductivity than air.

I see… And humid air is a mix between air and water.

It’s a bit trickier. But a simplified way to understand its effect is to look more closely and the thermal interactions between your skin and the air, when the air is not moving. Let’s draw a sketch in the case where air is colder than 37°C (98.6°F).

Now, here’s the important bit. When air is not moving, a layer of warmed air forms around the skin. As a result, temperature decreases relatively smoothly from the flesh to the air. But then, at the immediate contact between skin and air, the difference of temperature is quite small, and hence the flow of heat from the skin outwards will be small. Thus, we will not feel too cold.

Exactly. And, as a result, when wind blows, the air in contact with our skin is constantly renewed, hence preventing the formation of a thick layer of warmed air that would prevent heat from flowing away from our body at too fast a rate.

This effect is captured by the so-called wind chill factor.

In fact, more generally, the key to not being cold when the air temperature is very low, is to construct a thick layer of warmed air around our body.

I see what you mean… But how can we do that?

As often, the answer can be found in Nature. In fact, Nature had figured that out millions of years ago, when she invented hair and feather.

Have you ever had goosebumps on a cold winter evening?

Well, that’s Nature straightening your hair to trap a thick layer of hair on the surface of your skin! This is beautifully explained by AsapSCIENCE in the following video:

Now, we clever human beings have gone further and created clothes. The role of clothes is exactly the same as goosebumps, although clothes are evidently much more effective. They trap air around your skin, hence forming a thicker warmed layer. At last, this diminishes the flow of heat out of our skins. In other words, it makes us feel less cold!

Does this have to do with isolation?

Yes! Civil engineers have found out that window glasses had a high thermal conductivity. As a result, heat tends to flow out of buildings through windows, even when windows are closed. They then noticed that, conversely, air has a low thermal conductivity. Their clever idea was to form a thick layer of warmed air, which they put in-between two window glasses. This technique is called double glazing, and if your house is modern, it probably has it!

Still, if we look back to the initial example of this article, it seems that our journey through the physics of temperature needs an important halt.

Manaus, that city that terrified so many FIFA World Cup football players, is very humid, but its temperature hardly exceeds 32°C (89.6°F). So…

So humidity should actually increase the outward flow! Hence, players should feel colder!

So why on earth did they complain about heat?

It’s because thermal conductivity is not the only thing that affects heat transfer!

What else affects temperature? 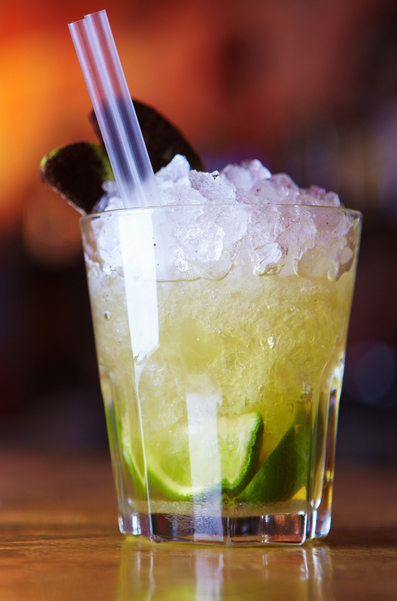 Take some drink. If it’s not cold enough, add some ice. Now, here’s a tricky question: Why will your drink cool down?

Isn’t it because ice is cold?

Hummm… So I guess this has to do with phase transitions…

Exactly! The transition from solid to liquid and the one from liquid to gas are ways for materials to absorb energy. Quite a lot of it, actually. So, when ice melts in your drink, it absorbs the thermal energy of your drink to become liquid. This absorption is about 10 times more important than the effect of thermal conductivity. It is this huge factor that explains why muggy 30°C (86°F) Manaus is so terrifying!

But how does sweating help them cool down?

It’s not the sweating per se that cools them down, but the evaporation of the sweat. By undergoing a phase transition, sweat takes energy away from our bodies, which cool them down.

Fine… But what does this have to do with Manaus’ humid heat?

The trouble with humid air is that it’s already filled with water vapour. And this implies that the air is not really willing to accept more water vapour. And, thus, while players sweat a lot, their sweats hardly evaporates. And that’s why their bodies have trouble to cool down.

I see! That’s why muggy weather makes people hover inside their sweat!

Exactly! Because the body is hot it keeps sweating. However, because the air is already too humid, the sweat does not evaporate. This means that we end up too hot, all sweaty, and very sticky because of the sweat…

To determine the apparent temperature due to humidity, meteorologists have designed the heat index.