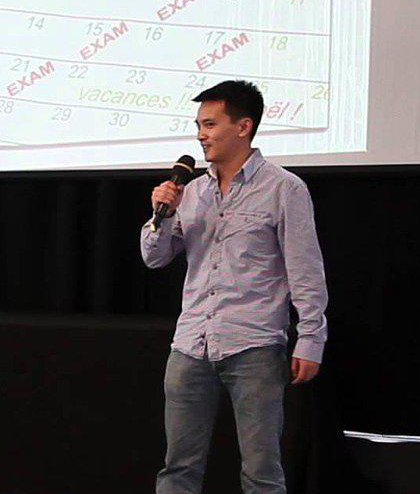 Since 2012, I have been writing articles and making videos of math and science popularization on the Science4All.org website, the English Science4All YouTube channel and the more popular French Science4All channel. I have won the 1st prize of the Votre Soutenance en 180 Secondes competition and been interviewed by MIT Glimpse. In 2014, I produced a video documentary on La Magie des Mathématiques des Classes Préparatoires aux Grandes Écoles.

I have published three books in French, called La formule du savoir, Le fabuleux chantier (with El Mahdi El Mhamdi) and Turing à la plage (with Rachid Guerraoui). The first one has been translated in English, and is entitled The Equation of Knowledge. The translations of the two other books are hopefully forthcoming.

I can be contacted by email at len@science4all.org.

Science4All is my baby. I launched it in April 2012. Back then, the goal was to create a platform for researchers and science enthusiasts to share and communicate science. However, two things that I did not fully expect occurred. On one hand, while many friends promised me to write, few actually did, and even fewer took the time to write well. On the other hand, to still have the website going forward, I started to write, and even to write a lot. And in the end, I ended up loving it. As a result, while few helped me to get there (I still have and want to thank Thibault, Thomas, Herminio, Estève and Scott !), Science4All eventually grew. It now has 400 daily visits!

At its beginning, Science4All was mainly a website of popularization articles. However, slowly but surely, I haven’t resisted the temptation to try other communication medias. Mostly, I have greatly populated Science4All’s YouTube channel, especially lately with a series on general relativity and a French documentary on La Magie des Mathématiques de Classes Préparatoires.