You’ve probably heard about Einstein, the physicist famous for his theories of space-time relativity, and whose face and wacky hair-do have become synonymous with the term “genius”.  During the next three posts we’re going to introduce some basic concepts involving geometry, which means “the measure of the Earth”, use these concepts to explore the process of making accurate maps of the Earth, and then build from here to get a grasp of some of the basic tenets of Einstein’s revolutionary general theory of relativity. These topics, in the area of math known as “differential geometry”, are both simple and cool, so read on!

Geometry on the Earth’s surface

Before we get to broader level ideas about the universe, let’s start here on Earth.  We all know that the Earth is a sphere, right? This is usually taught to us quite early in our school studies, but it’s not at all obvious, because for most of the things we do on the surface of the Earth, it seems to be flat.

But it doesn’t appear to be flat – what about all the mountains and valleys?

Good point – the Earth appears to be flat overall, with irregularities such as mountains and valleys. From our vantage point as relatively small creatures living on the surface of the planet, it appears that we are living on a more-or-less flat surface, like the top of a table, rather than a curved object that’s very close to a sphere in shape. 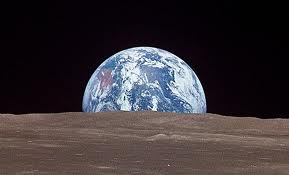 Here’s a NASA image of the Earth as seen from the moon during an Apollo mission in 1969.  The moon is also a sphere (approximately), but from someone on its surface, it appears to be flat. Many of the people of the ancient world are said to have feared travelling too far in a ship, due to their belief that they would eventually reach the edge of the world, and fall off.  Here is a symbolical depiction of the edge of the world:

In this 1888 French depiction of medieval cosmology, a man stretches his head beyond the Earth’s firmament, attempting to gaze into the heavens. This has both literal and symbolic connotations – the man is both literally sticking his head beyond the edge of the Earth, and also, symbolically, attempting to gaze beyond the Earth’s surface into the unknown. This literal view of the flat Earth is also promulgated in the Old Testament of the Bible, and other historical sources.

So how did we find out that the Earth is round, without flying to the moon?

You can see this directly on the Earth by looking at the Earth’s curved shadow as it crosses the moon, and by watching ships as they approach from the sea – the first part of the ship you see is the top of the mast, and the body of the ship becomes visible as it sails closer, which is a result of the fact that the ship is in fact sailing around the curved Earth, not on top of a flat Earth. Both of these observations imply that the Earth is not flat. It is also possible to determine that the Earth is not flat simply by making measurements directly on its surface, using a property known as holonomy.

The ancient Greeks, assuming the Earth was flat, developed a powerful set of tools to use to navigate the surface of the Earth, such as sailing across the Mediterranean Sea.

These tools were made into a system of geometry by a Greek man named Euclid, who lived around 300 BC.  Euclid’s system was especially powerful and influential since it organized Greek knowledge regarding geometry – the measure of the Earth’s surface – into a coherent, logical system. 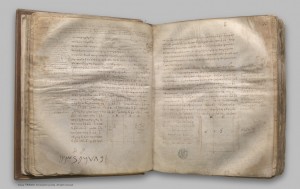 A facsimile of a version of Euclid’s Elements copied in Constantinople in 888 AD, from claymath.org’s historical archives

The two key units of measure in Euclidean geometry are length and angle.  You may be familiar with the concepts of length and angle from using rulers or protractors.  In order to navigate on a ship or on land, you need to know two basic facts: which direction you’re heading, and how far you have traveled. 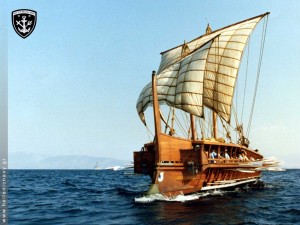 Replica of a Trireme, the ship used by Greeks such as Alexander the Great (around 334 BC) for both warfare and exploration. Image from library.thinkquest.org

In order to navigate the Earth’s surface, such as on a ship on the ocean, all we need is these two units of measure – the direction in which to travel, which can be given using a compass as an angle measured from due north, and the distance by which to travel, which can be calculated using a ruler on a map together with measurements of the ship’s speed, or, for longer distances, with calculations based on star positions.

Euclid was able to create a powerful way to systematize the knowledge the Greeks developed regarding “the measure of the Earth” – geometry.  Importantly, though, Euclid and the Greeks based their study of the Earth on the assumption that the Earth is flat.  One example of how this assumption plays out in Euclid’s system has to do with parallel lines – lines that lie at the same angle with respect to each other.   A good example of two parallel lines is seen in this picture of two straight train tracks. 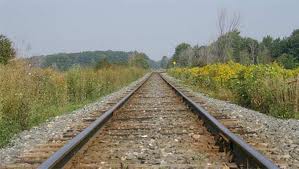 Imagine if we extend these two train tracks in a straight direction, so that each of the two tracks is always going straight ahead.  In Euclidean geometry, which is geometry on a flat surface, it’s assumed that two parallel lines, such as these train tracks, will never meet, no matter how far they are extended.

Why Euclidean Geometry is insufficient

Now we recall that the Earth is not actually flat.  Instead, it’s a sphere, and here a problem arises, because on a sphere, two parallel “lines” do eventually meet.  Keep in mind that a line is straight – if you walk on a line, you always walk in the same direction, straight ahead.  On a flat surface, if you keep walking straight ahead, you can continue indefinitely (or fall off the side of the Earth, as some of the ancients thought), but on a sphere, something different happens. Take a look at this picture: 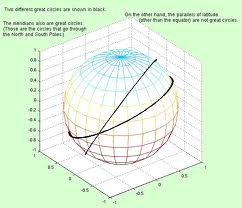 This picture shows two “lines” on a sphere.  If you extend a straight line on a sphere, you eventually will come back to where you started, since you will travel around the Earth.  In the same way, you can sail west from Europe, through the Panama Canal, across the Pacific to Asia, through the Suez Canal, and eventually make it to where you started, by travelling westwards.  A straight line on a sphere such as the Earth is actually a circle – or what geometers call a “great circle”.

In the picture, we see two adjacent great circles that are parallel – in the same direction – in the upper right part of the picture, but which intersect in the lower left.  On a sphere such as the Earth, parallel lines actually do intersect!  Another way to imagine this is – if you and a friend start walking next to each other on a sphere, and each continue to walk straight ahead, your paths will eventually intersect.

But, if you both are walking straight, won’t you stay the same distance apart?

On a flat surface, you would stay the same distance apart. But since the Earth is a sphere, its surface is curved. So if you and your friend both walk in a straight line, your paths will move closer and closer, due to the underlying curvature of the surface of the Earth, and your paths will eventually intersect, as seen in the picture above.

This again suggests that geometry on a sphere – what geometers call spherical geometry – is fundamentally different than geometry on a flat surface.  This is crucial because the Earth appears to be flat from our vantage point on its surface, but is actually a sphere.  This means that the “flat surface” geometry developed by the ancient Greeks and systematized by Euclid – what is known as Euclidean geometry – is actually insufficient for studying the Earth.

This insight – the fact that the Earth is not a flat surface means that its geometry is fundamentally different from flat-surface geometry – led to the development of non-Euclidean geometry – geometry that has different properties than standard, flat surface geometry.  A consequence of this is the fact that it is impossible to create a perfect map – representation – of the Earth, on a flat surface.  The art and science of map-making exists due to this fundamental distinction between flat surfaces and spherical surfaces.  This is what we’ll be looking at in our next post.  Stay tuned.