In April 2010, I was at the Charles de Gaulle airport at Paris to take a plane. As time passed, more and more flights were cancelled. Fortunately, mine was not. I’ll learn later how lucky I was. I probably got on one of the last planes that took off from Paris. All flights were cancelled during the following week. 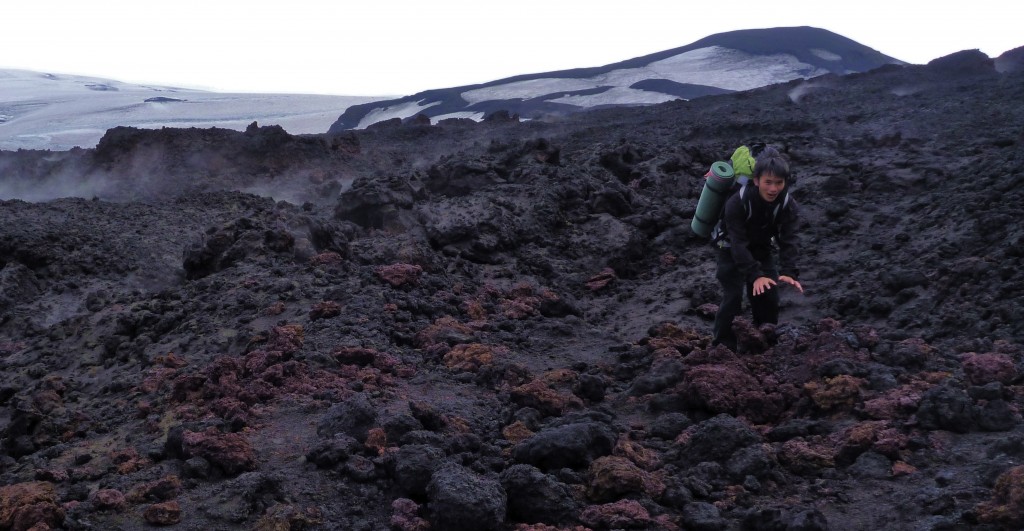 Why were all the flights cancelled?

Because of the Eyjafjallajökull. More precisely, because of its eruption and its ashes which were floating all over Europe. Although nasty for plane transportation and Icelandic economy, the eruption was a spectacular event. A year later, during a two-week thrilling holiday, I had the chance to walk on the lava of the Eyjafjallajökull. The lava was still red and smoking. It was incredible! However, as I had found it out, the destructive power of volcanoes is merely one of the numerous geological wonders of Iceland.

Why Iceland is an Island

For a start, the mere existence of Iceland is surprising.

Iceland is located on the geological ridge between the Eurasian and the North American tectonic plates. Yet, geological ridges are supposed to be at the bottom of oceans.

Why? What are the geological ridges?

The surface of the Earth is actually made of several plates, called tectonic plates. Each plate covers a part of the Earth, as displayed in the following image from WorldAtlas.com:

Now, these plates are moving, just like icebergs on water. In some intersections, the plates collide each other. In others they move away from each other. Geological ridges correspond to the latter case.

Does it mean that there is a hole in geological ridges?

Tectonic plates are floating on a large layer of magma, a hot viscous form of rocks. This layer is called the mantle. The floating tectonic plates are pressing on magma. Thus, magma is sprayed out where the plates leave some emptiness. As magma comes to surface, it cools and solidifies into solid rocks. In fact, so much magma gets sprayed out that ridges actually form the longest ranges of mountains on Earth. These “mountains” usually elevate 1,000 meters above seabed. Since the seabed is about 3,000 to 4,000 meters depth, geological ridges should remain around 2,500 meters below sea level.

There’s a lot more to say on tectonic plates and geological ridges. If you can, please write about them so that we can learn more!
Ah! I understand now why you said that the mere existence of Iceland is surprising…

Yet, Iceland exists and actually is an island. Thanks to a hotspot.

So they’ve got the WI-FI… It might explain why Iceland performs well economically, but not why it’s an island…

According to Wikipedia, there is no scientific consensus about what they are. Most scientists agree though on the fact that, in deeper layers of the Earth, at some precise locations called hotspots, some properties of the magma facilitate magma to erupt. As a result, important volcanic activities occur at these locations. Aside Iceland, well-known hotspots include Hawaii and Yellowstone. There is a much more to say about hotspots, and I’m no expert. If you can, please write about them! 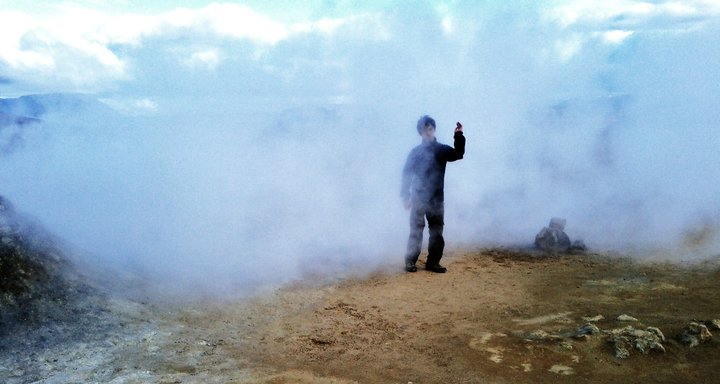 The geological properties of Iceland mentioned earlier imply that the continental crust of solid rocks of Iceland is very thin. The magma is not very deep. As a result, the temperature increases quickly below the surface. Yet, the continental crust close to the surface is often filled with water like a sponge, especially in Iceland where it often rains. In contact with hot rocks, this water boils and erupts out of the soil, then condenses when it reaches the surface. This creates smokes.

In some areas, smokes are very important. They are called fumaroles. In addition to boiled water, smokes also include different steams and gases that the soil is made of. Near volcanoes, the soil often contains carbon, chlorine and sulfur. This leads to steams and gases of carbon dioxyde, hydrogene chloride, sulfur dioxyde and hydrogene sulfide. The last one is toxic and stinks. It’s what comes out of rotten eggs. 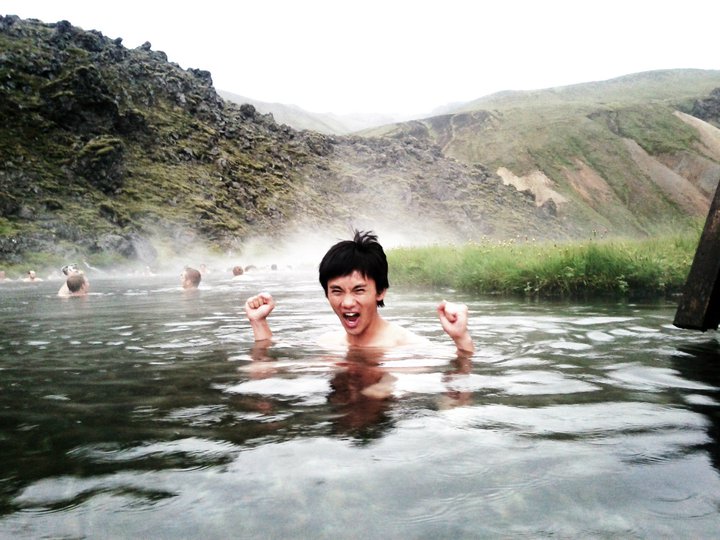 What happens to the boiled water then?

Some of it evaporates. And some of it remains liquid and flows along valleys, forming hot springs. The water trapped in natural or artificial pools then create what Icelandic people call hot pots. You can swim in these hot pots, even in winter when it’s snowing outside. An Icelandic professor actually told me that when two Icelandic persons argue, they sometimes settle their arguments in hot pots. They usually eventually make peace. Is there a better way to relax tensions?

I guess thermal sources are good for relaxing…

Not just good. They are very good. Indeed, hot pot waters are filled with minerals including sodium, magnesium, calcium, iron and many more. These minerals cure several illnesses, including arthritis, skin conditions and fibromyalgia. Close to the Keflavic International airport (40 minutes by bus), the geothermal spa called Blue Lagoon offers all sorts of relaxing balneotherapy. 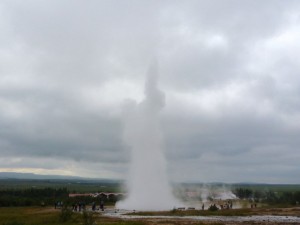 The name “geyser” comes from the Icelandic verb “gjósa” which means “erupt”. A geyser is an eruption of water. The most famous geyser in Iceland is called Strokkur (it’s the one on the picture). It erupts every 4 to 8 minutes. It goes up to 20 meters, sometimes reaching 40 meters. Amazing!

How can water go that high?

Eruptions of geysers are quite similar to eruptions of volcanoes. There is a long column of 23 meters of boiling water under surface. The water at the bottom is at 120°C. Yet, because of the pressure created by the column of water, this water is liquid. Now, as the water keeps being heated, at about 16 meters of depth, it eventually boils. This creates bubbles that go up and out of the column. As a result, the height of the column of water diminishes. And so does the pressure. Thus, water boils much more easily. This phenomenon is very quick, creating an important quantity of steam in the middle of the column. This steam expands quickly and erupts, driving all the column of water above it out of the soil.

It surely is. Volcanic activities provide dramatic phenomenons. However, these phenomenons can also be dangerous, especially because of eruptions. As opposed to what one might think, the main danger does not come from lava. It comes from water. It’s called jökulhlaups.

In Icelandic, jökull means glacier, and hlaups means run. Thus, jökulhlaups means “running glacier”. This phenomenon is also known as sub-glacial lake outburst flood. The most dramatic recent jökulhlaups in Iceland happened in 1996. It followed the eruption of Grímsvötn. Here are some comparisons to show you how huge this phenomenon is: According to wikipedia, 185 million tons of silt were carried, while the flood represented the 2nd largest river of the world for several days in terms of water flow.

Why does a volcanic eruption provoke such an impressive flood?

As you can see on the video, the flood is due to the melting of glaciers in contact with the lava of the volcano that erupted. An extraordinary quantity of water is thus created. And this water has to go somewhere… Yet, the flood wouldn’t have been that impressive if it wasn’t for calderas.

Calderas are collapsed volcanoes. Indeed, when a volcano erupted, the magma beneath it transforms into lava that gets sprayed out of it. This creates empty spaces inside the volcano. Sometimes, the volcano can no longer stand. It collapses creating above it a large crater, called caldera. When it rains, calderas can then be filled with water, resulting in beautiful lakes.

So there are lakes created by calderas in Iceland…

You forgot that Iceland is a very cold country! The water on calderas freezes. Yet, beneath thick layers of ice, there is some water, heated by the magma beneath the caldera. It’s like a lake beneath a glacier. It’s known as a sub-glacial lake.

But what do calderas have to do with the flood?

They are like dams. The water cannot get out of the sub-glacial lake, not only because its level is too low, but also because glaciers block it. Thus, when a volcano erupts and melts a lot of water, calderas gets filled with water. But this water is blocked at first. In the case of the 1996 jökulhlaup, the water was actually blocked for 2 weeks.

Wait, if calderas are like lakes, why would they release all their water?

Because calderas are sub-glacial lakes. They are located beneath huge glaciers that push them out of calderas, like pistons. And once the sub-glacial water stream is created, they manage to eject most of their waters.

Think about it. The volcano is at hundreds if not thousands of degrees celsius. It melts a phenomenal quantity of water. But this water is accumulated during two weeks. Then, all of a sudden, it gets released, pushed by the largest ice cap of Europe, that is, a weight of billions of tons. This results in the two-week accumulation of melted water being poured in only a few days. As you can imagine, this creates an extremely powerful flood, which can move and destroy rocks of several tons, as well as human constructions.

I’m not so sure about the rough estimates I’m giving here. If you can approve or criticize them, that’d be great!
Can you recapitulate?

Sure. The following figure recapitulates all the steps that lead to floods.

In this article, I have given you a glance at the geological wonders of Iceland. Yet, there is so much more I haven’t talked about, either because it would make the article too long, or simply because I don’t really understand the other phenomenons. Basaltic columns, waterfalls, U-shaped valleys, fjörds, seism and volcanoes are just a few of the other amazing things that Iceland can offer. If you can, please write articles about these geological structures.

I’d like to finish by highly recommending to book a flight to Reykjavik, to witness these geological wonders with your own eyes. Iceland has extraordinary landscapes to offer. In particular, if you go there and feel in shape, do the Landamannalaugar to Skogar trek. It is definitely the most amazing holiday activity I have ever had. It’s a bit long (3 to 6 days), but you’d be going through amazingly colorful volcanic landscapes, dark black sand deserts, dramatic steep valleys, smoking volcano lava, large freezing glaciers and wonderfully powerful waterfalls. Here are two pictures of my trip to help you decide whether to book the tickets:

Glaciers: Retreat, Moraines, Valleys, Fjörds
By Lê Nguyên Hoang | Updated:2016-02 | Views: 1187
Glaciers are spectacular phenomenons of nature. The physics they are based on is surprising, while the geological role they have is essential. In this article, we discuss these facts, as well as their retreats and their dangers.