What is HDI? A chemical? A Peugeot Citroën engine type? A video connector? Well, it might be. But here – and as in most of economics, sociology, international relations or politics references since 1990 – HDI stands for Human Development Index.

Easyyyy, I know what it is. “Human” – I get it – that’s me. Development…not quite sure, is it a movement or something? And “Index” it is my second finger. Soooo HDI is the human movement I can draw with my finger! Look:

Well… it could be! Each of these words encompasses so many different meanings that it is hard to find out the exact definition by guessing from its components. Let’s go back to the origin of the HDI. It was invented by these guys: 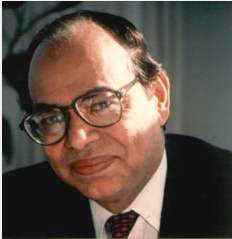 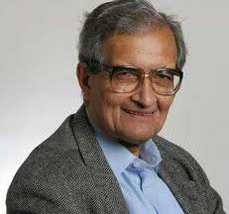 and published in the first Human Development Report of the UNDP (United Nations Development Programme).

I’m sooo clever. Then these guys are really good at drawing human movements with their fingers. Impressive!

Well… I don’t know. But what I can tell you is that the invention of the HDI had major implications in economics and in development policies worldwide. The HDI is used as a frame of reference for both social and economic development and enables comparisons between countries. The beauty of this indicator lies in its simplicity: with one figure, you can read the level of economic and social development of one country in comparison with other countries of the world.

What is important to notice is that because of the quantity of indicators to look at when you think about making the right choices to encourage development (e.g. GDP, literacy rate, health, quality of water, power supply…) some of them tend to be prefered to others as they’re supposedly more significant. If we go back to your index, these guys (who also are economists) said economy was pointing out and focusing on the wrong figures, especially GDP. They said that the “human beings are the real end of all activities, and development must be centered on enhancing on their achievements, freedoms, and capabilities” (read Human development index: methodology and measurement – S. Anand, A. Sen, 1994).

Ok… So it is not about drawing but about showing with your index! These guys showed the other economists what they should really look at.

Yes! They said that it is the life people lead that is really important and not the commodities or income that they happen to possess. Even if they play a role, they neither measure by themselves the living standard nor the quality of life.

But actually, for the economists and statisticians, an index is a figure calculated to make comparison between data. You’ll understand it probably better when you’ll see the calculation example.

And why GDP? Economists were looking at the General Dental Practitioners figures to understand the human development?

Probably it has some links…. But no, that’s not what happened by then. GDP stands here for Gross Domestic Product and not for dentists. Invented by Simon Kuznets in 1934, GDP aggregates different accounting indicators for a given country. Answering the question “how big is the economy?”, GDP gives the market value of all final goods and services produced within a country during a specified period of time (click here to read more on GDP and US national income and product accounts). Amartya Sen and Mahbub ul Haq said GDP is a mean but not a goal.

The report states that “the purpose of development is to offer people more options. One of their options is access to income – not as an end itself but as a mean to acquiring human well-being.”

The HDI stems from the philosophy of capability approach (to welfare economics) developed in the 80’s by A. Sen and N. Nussbaum (History of HDI by E.A.Stanton, 2007). If we go back to your idea of body movements, the movements you make can be means to an end. For example when you walk from your bed to the shower, your movements are free to help you reach your goal. This freedom – or opportunity – to achieve your goal is called “capability” and it could be way reduced if you were disabled for example, or in prison. In HDI’s theories, it is presumed that people’s goal is to be well (“well-being”).

Can you measure that?

That is exactly what they tried to do with the HDI. They said human development can be measured through three main dimensions – or “capabilities” – empowering humans to achieve their desire state of being: a long and healthy life (health), access to knowledge (education), and a decent standard of living (income).

UNDP explains the calculation methodology on its website. But I will explain it here for you.

Since 1990, several changes were made in the calculation methodology and in the selected data. I will only explain the latest version. But first, you need to keep in mind that HDI evolves between 0 and 1 only and that there are two steps in its calculation process (more details on UNDP technical notes here).

2)      Aggregating the sub-indices to produce the HDI

Why only between 0 and 1? What does it mean?

The minimum values are conceived of as subsistence values and the maximums are the highest observed values in the time series (1980-2011). Then, if the health index is 1 for a specific country, it means that the actual value for this country is equal to the maximum possible value.

Ok, but how do you measure the health index?

And the two other dimensions?

You know what “average” means right? Synonyms of the adjective would be common, normal, moderate. As a statistic tool, it gives the central tendency of a specific set of numbers.

A geometric average is usually preferred to an arithmetic average in comparing different items which have different numeric range because the geometric average prevents any range of items to dominate the weighting. In the case of the EI, expected years of schooling might be slightly higher in general as mean years of schooling as it foresees future tendencies and a growing importance is given to education worldwide. So if we used an arithmetic average, the expected years of schooling would be dominant in the central tendency calculated. One of its greatest interest is to value a balance pattern. If a country has a a high level of education of its adult population but does not have any school for younger generations, then it will have a lower education index than a country with an average level in each two dimensions.

Geometric average is calculated with the formula below (don’t be affraid, this is just a more symbolic way to explain what we expressed above):

Ok, and what about income? You add everyone’s gross salary in the country?

Income index (II) is calculated with the Gross National Income per capita, in $, in Purchasing Power Parity. That makes a lot of new words right?

The Gross National Income per capita is the gross national income divided by the number of nationals. As explained by OECD (Organization for Economic Cooperation and Development), it is equal to GDP (explained above) less net taxes on production and imports, less primary incomes payable to non-resident units (employees and property) plus  the corresponding items receivable from the rest of the world. In short, you take the production of your country, you get rid of taxes on production and imports made by economic agents, you get rid of the money they owe agents based outside of your country and include the money these agents owe them.

But as you might know, when you travel, you can see that different countries tend to use different currency with different values. That’s why in order to compare the different income level, every currency is converted into dollar in order to allow comparisons.

Also, you might have noticed that with 100 USD from your bank account, you can buy one full diner with wine for two persons in Switzerland  and the same diner for… 10 persons in Egypt! This is why Purchasing Power Parity (PPP) was created. It establishes an exchange rate between countries that makes comparable the purchase of the same goods and services in two different countries.

Thus, the GNI in $ at PPP makes the countries’ income comparable.

AAh, thank you that’s a lot clearer now! So you calculate the indice of GNI in PPP $ and it gives you the income index of one country! That’s it?

Almost. The HDI assumes the richer you become the smaller role money plays as a proxy for well-being. So it uses  “the logarithm of income, to reflect the diminishing importance of income with increasing GNI.“ Indeed, there’s a big difference between earning 500$ and 1,000$ per month, especially at the end of the month. But not much between 5,000$ and 10,000$.

Logarithm reflects best the diminishing importance of income because, if you apply this function to a specific variable, the grower the variable becomes, the slower is the result going to increase. Thus, the higher the income is, the less weight it will have in the HDI calculation. Look at the curve: 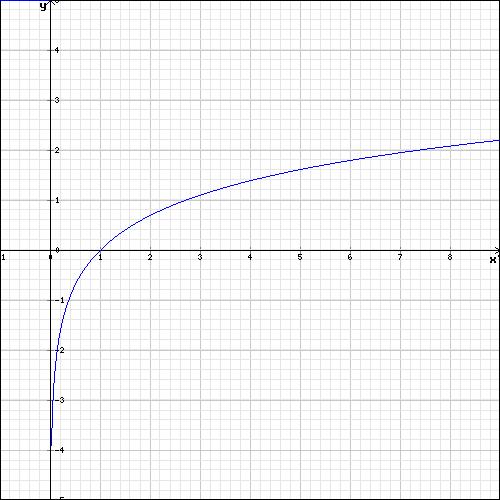 For Vietnam in 2011, the income index calculation is:

Don’t worry, it is almost done and if you got everything that we already went through, the second step is easy. You just take the geometric average of LEI, EI and II.

Yes. Just keep in mind that the interpretation of the result should be closely linked to the way the data are collected for each of the above mentioned dimensions and that it can be difficult to get accurate figures (read UNDP technical notes). The HDI calculations are made by the Human Development Report Office (HDRO).

Let’s sum up what we learnt here. As there are many dimensions to look at when you try to coordinate development policies worldwide, it is easier to use one figure – relevant enough to encompass different theories and dimensions you want to consider. HDI’s introduction in economics relies on the previously highlighted limits of GDP to reflect the level of development and on the growing attention paid to people’s well-being.  The Human Development Index identifies three main dimensions (education, health and income) – reflecting the freedom of people to reach their well-being desire –  and encourages balanced policies towards these three dimensions through the geometric average. HDI is used a lot to create ranking among countries and to categorize them for worldwide development programmes.

You can look at rankings on the UNDP website and play with the UNDP worldmap here: 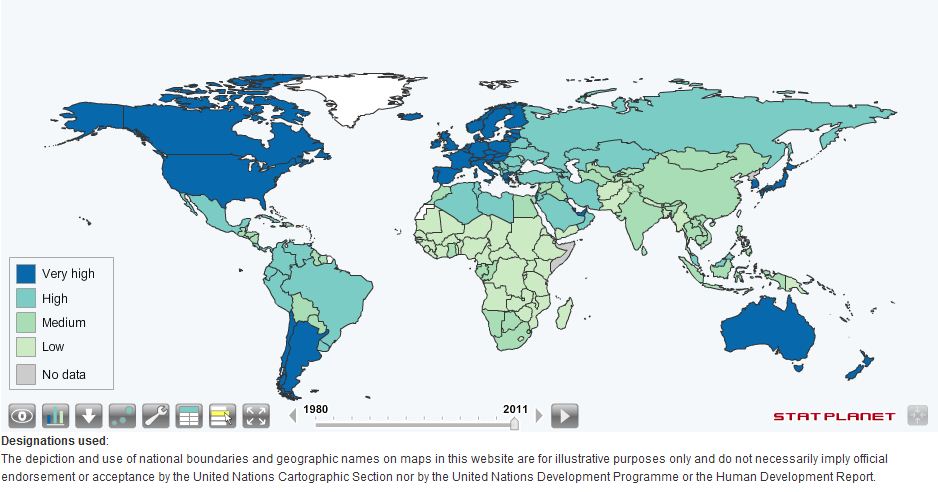 However, this article does not explain the gender based approach neither HDI limits nor criticisms that could be further developed. Same thing for GDP, economics indicators, mathematical formalisation of the economics or the capabilities approach. Inspiration for contributions or new articles!